The best holidays happen when you book something, to go somewhere, by yourself. Especially for the first time.

Port Douglas is located in the northern part of Australia. It is the closest point to the Great Barrier Reef. And if you are going to make a trip all the way up there, you might as well take that extra step and visit one of natures most amazing wonders.

From all the people that I’ve spoken to, and contrary to trip advisor, I found that the Quicksilver touring company to be the one that came highly recommended. This also included a recommendation from a local that lives there… and nothing can beat local advice. 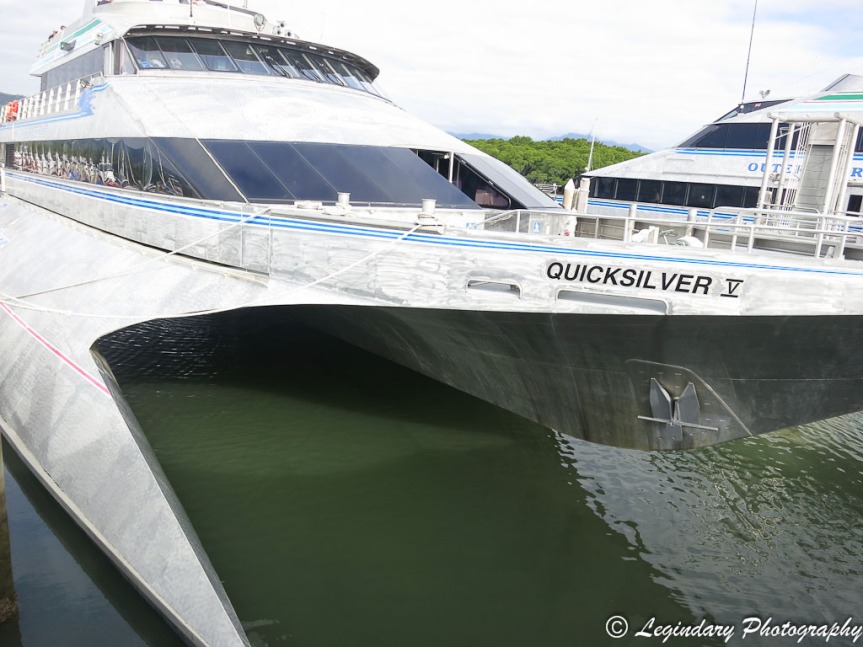 The catamaran could seat 300 people and it took us out to their pontoon to the outer reef which was an approximate 2 hour journey. And along the way, we got to see some spectacular views of the natural wonders, including clouds that kissed the mountains! I also heard that there was on island that was owned by some rich guy. I couldn’t help but take a picture in front of it as a reminder that I too could own my own island….one day…

I’m a very poor swimmer. To the point that I cannot swim. But what good is going to the Great Barrier Reef if you’re not going to get into the water. So I decided to do the underwater Ocean Walker. There is a platform, 4.5 – 5 meters below the sea where you can watch the coral up close with an old school diving helmet. And needless to say, it is pretty damn amazing! Was I scared, hell yes. But I don’t know whether I would come back for another visit and from that perspective, I thought, you might as well do all that you can in one location. And that’s how the budget I had set, got blown on the first day… 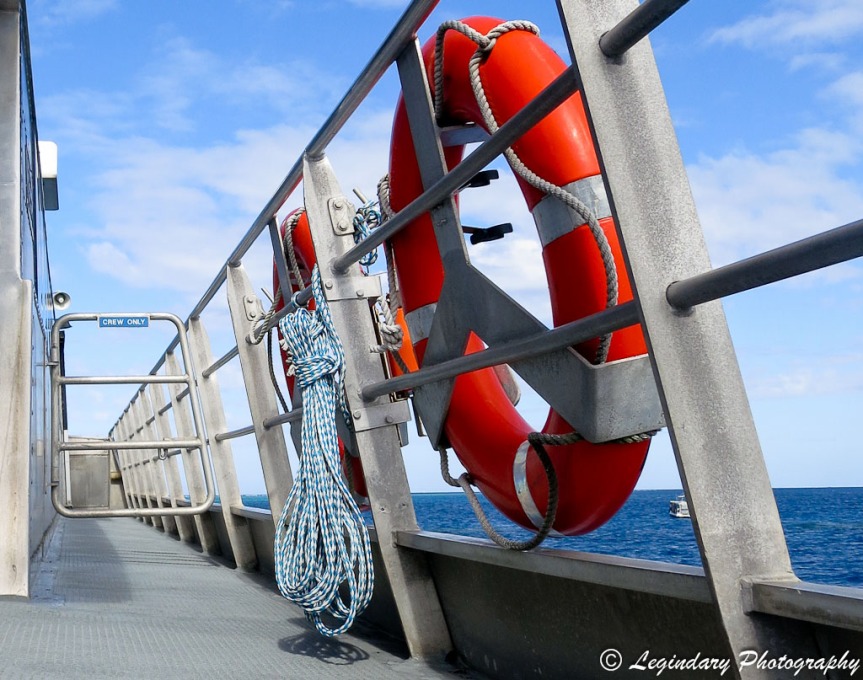 You could choose whatever other tours you would like to take whilst on the pontoon. This included the snorkeling, a helicopter ride over the reef, ocean walker and diving. Lunch was provided from 12 – 2 and we all had to be back on the boat at 3pm to head back home. Included in the price of the tour was a ride in the glass bottomed submersible, entry to the underwater observatory and lunch. They had plenty of facilities on the boat like a full bar and snacks to tide you over. Yes, I went there with the pun….

And because everything is timed, it became a fine art as to how you juggle things. Get there at 11:30, do the submersible tour which lasts for 20 mins, have a light lunch before you go pick up your gear for the oceanwalker at 12:30-12:45 for the walk at 1 which lasts another 20 minutes.

The glass bottomed submersible was amazing. The fish would come so close, that you could almost touch them. Once we were on our way, the coral itself was just spectacular to see. Did you know, that as you go deeper into the ocean, the colours of the rainbow go away in the reverse order? So red is the first colour to go. Which is why, the water always appears to be either blue or green. Hmm, perhaps that also explains why the sea is blue… Anyway, I digress. So they recommended that we use a red filter on our photos to really make the photos come to life. At the same time, I also was acutely aware that the reef wasn’t as healthy as I remember from all the documentaries I had watched through my high school geography and biology classes. And I must say that I do agree with their stance to close the reef down and mark it as a heritage listing. At that precise moment, a turtle swam passed and I was taken away by the beauty of life under the sea.

The ocean walk was first and foremost scary. They had to put weights on you to hold you down and you headed onto a platform that is 4.5-5 meters below the sea. To top it off, the awesome diving helmets they provided weighed about 30 kilograms (think it’s 60+ pounds) and I was happy that I was the only person to be able to take it’s weight. I did a few cheeky squats with it and it was fine. But it’s interesting. You hear the hissing sound of the air being pumped into the helmet and the water is just there around your neck. And whilst the rubber soles made walking really hard on the dry pontoon, on the platform and on the stairs leading down to it… it felt like there was nothing under foot. And as they say, watch the first step. It’s a doozy. I completely missed it and went for the second one. Yeah, I panicked momentarily and then focused till I found the step and then proceeded.

Did you know? Coral are ingenious creatures, they ensure they grow on a flat plate. The reason for this is, when the strong underwater currents rip them off from their place, they just float to another place and keep on trucking! And the amoeba growing on them, will continue to nourish them even if the coral is broken off. It was amazing to see.

Then we got to see a sea cucumber. And it was one of the most nicest things I’ve seen. It’s soft and fluffy and it has a thousand little suckers under it’s body to make it travel around. If you held it on your hand long enough, it would stick to your hand. The trip finished with a massive conch shell, which well, whilst awesome, paled in comparison to the other things I had seen. But that’s just me. It would have been the size of my head but still. Then the divers proceeded to feed the fish and boy did come so close. Well… for the first time, you could touch them and it was weird. It’s not like I’ve not gone fishing before, but there was something majestic in being able to touch a fish and not have it try to wriggle away from you because it’s aware of it’s imminent death.

After the walk however, I was completely worn out. I didn’t think it would, but I had no energy left. The rest of the journey was taking pictures of the beautiful Port Douglas on the way back and of the marina once we docked there. Enjoy the photos within this post, as I ensured that each one gave it’s own meaning. 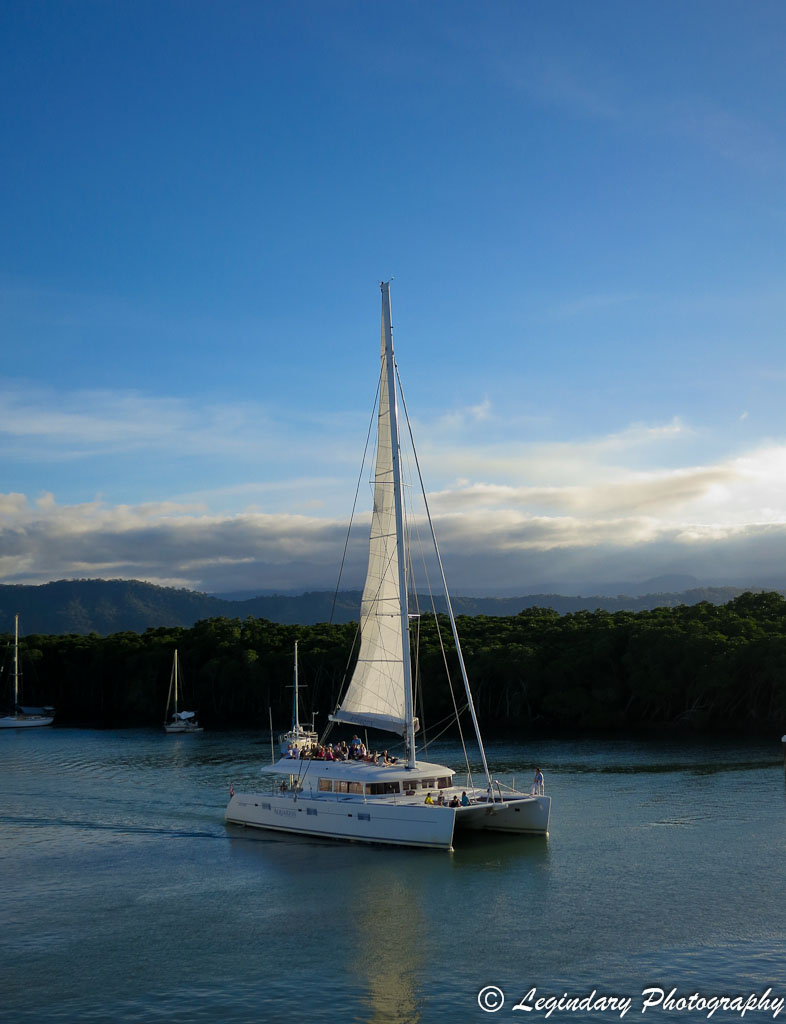 Fine Dining into the sunset